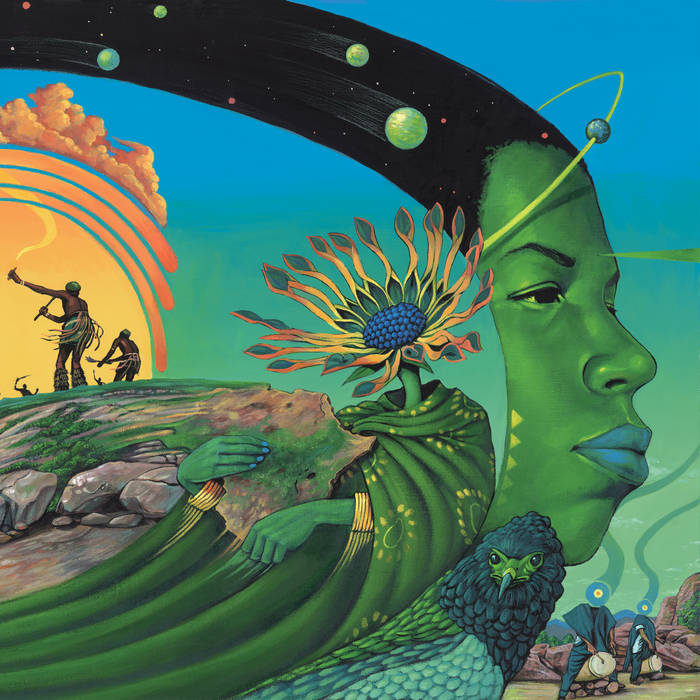 Lord Dubious The funk queen comes thru with a grip of chunky beats for ya! Lots of vibes on display here. Favorite track: Mary Lou's Motherboard.

dfunklove Tha fonk is so deep it gets my spirit moving every time. This album is 100% classic from start to finish. Brother George would be so into it! Favorite track: When The fOnk Radiates.
more...

The names people invoke when trying to describe Georgia Anne Muldrow are unavoidably, almost impossibly lofty: Nina Simone and Alice Coltrane, Erykah Badu and Ella Fitzgerald. The Los Angeles-bred singer, songwriter, and musician is all and none of these things –– she’s able to channel the greats from decades past in soul, R&B, and jazz, but her own music is too subversive, too forward-thinking to be cordoned off as a footnote to any one lineage. Over the course of a career that spans dozens of releases and ropes in a wide array of talented collaborators, it would appear that Muldrow has explored every nook and crevice of her tastes and talents. And yet, after nearly 15 years, each new turn in her catalog is a step directly into the unknown.

Released by Mello Music Group, VWETO II, is this kind of exploratory turn. It’s the sequel to her 2011 album by the same name. Like its predecessor, VWETO II is an all-instrumental affair, reestablishing Muldrow as one of the most reliable crafters of sturdy, funky, spaced-out hip-hop working today.

VWETO II comes in the wake of 2018’s daring, acclaimed Overload, which reaffirmed Muldrow’s gifts as a vocalist and as a songwriter: tight melodies cutting through airy beats or working in tandem with heavier ones. Here she puts different musical traditions in conversation with one another, from the way “Big Mama Africa Jam” uses the templates of this decade’s beat scene in a way that recalls hints of G-funk, to the way that “Emo Blues” seemingly shirks its title to become something stranger and synthier. From the irresistible slap of “Bronx Skates” to the piercing clarity of “Brokenfolks,” the number of styles that are rendered effectively here is, simply, dizzying.

Nowhere else on the globe would the deployment of all these seemingly disparate sounds in service of a single end seem reasonable, even intuitive. Muldrow grew up the daughter of a jazz guitarist and the musical director of a spiritual center, the very embodiment of a musical community that is at once concerned with the corporeal world and something beyond. It’s why the album’s penultimate song, the head-nodding “Wu Punk,” is able to be not only menacing but a little bit Gothic; it’s why it seems perfectly natural for Muldrow to title one of the most celebratory cuts “Nate Dogg’s Eulogy.”

Vweto, in Swahili, means “gravity.” Where Muldrow’s songs often grapple with ideas that are complex and esoteric, VWETO II is a reminder that their backbone is a tight, expert musicianship. The album could be played at a summer cookout or a weekend house party and be an instant crowd-pleaser, but it also rewards more attentive listening –– to the subtle tweaks of familiar formulas, to the high-wire technical passages, to the emotional energy being wrung from each instrument in the mix. It should be no surprise that for an artist like Georgia Anne Muldrow, even a return to the basics would be a step into the future.

Featuring appearances from Kari Faux, Bluestaeb and and interview with NY-bred artist Wiki